Young male drivers are known to be the number one cause of car accidents in the United States.  Because of this, they see the highest car insurance rates out of any gender and age group.  Consequently, if you are a young man living in the United States, you may find it very difficult to find auto insurance that is affordable.  Fortunately, we have a few tips for you below that will get you well on the way to finding cheap insurance premiums for young men.

Why Do Men Pay More?

In nearly every state in the country, men see higher car insurance rates than women.  This is due to the fact that women are generally safer drivers than men.  They are more attentive on the road, drive slower, and are less reckless.  They are less likely to get serious driving infractions and also less likely to be involved in fatal accidents.  They also are less likely to drive expensive, fast cars that are more expensive to insure.  Last but not least, women drive less than men, which puts them at an even lower risk of getting into an accident. 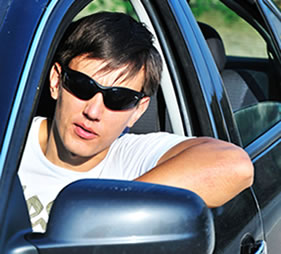 To throw even more gas on the fire, young people are also another high risk group.  Young drivers are generally less experienced on the road and are easily distracted.  With distractions coming in the form of misbehaving friends in the car, texting and driving, loud music, and talking on their cellphones, young drivers are much more likely to get into accidents than their older, more mature counterparts.  Because of this, insurance companies lump young drivers into the group of drivers that pays the most for auto insurance.

As you can see, being both young and male are two strikes that are hard to come back from.  Luckily, for young men, despite their shortcomings, there still are some methods of procuring cheap auto insurance rates.

How To Find Cheap Auto Insurance Rates As A Young Man

There are a number of ways young men can save on auto insurance. Let’s take a look at some of them now:

How NOT To Get Cheap Auto Insurance

Being young and a male, you already have two strikes against you in the eyes of most insurance companies.  You do not want to do anything stupid to prove their suspicions that you are not to be trusted behind the wheel of a moving vehicle.  Therefore, you have to be extra careful on the road.  Be that responsible driver that insurance companies want to insure.

If you get multiple speeding tickets or other driving infractions, you will see your insurance rates increase to near unaffordable levels.  If you are at fault in a car accident, you can also expect your car insurance premium to go up higher and higher.

As a young man, you will be placed under a microscope by the insurance companies until you are at least 25 years old.  During this time, it’s crucial that you do not make any mistakes, because you will pay for them dearly.  The choices you make, from the car you drive, to whether or not you drink and drive, will all play a huge role in determining your auto insurance rates.

Be smart when it comes to driving, and eventually, the insurance companies will reward you with insurance rates your bank account will thank you for.