Why is Car Insurance Mandatory? Is This Unconstitutional?

Today, we’re explaining everything you need to know about the United States Constitution and how it relates to car insurance.

Courts Have Repeatedly Rejected Claims that Car Insurance is Unconstitutional 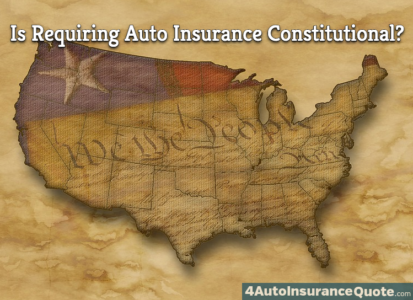 In the vast majority of these cases, courts have rejected the claim that car insurance requirements are unconstitutional.

In October 1987, for example, the California Supreme Court issued a landmark verdict upholding the 1984 state mandatory auto insurance law. That law requires California motorists to prove they have liability insurance when stopped for traffic violations.

In this case, it was argued that the new law was unconstitutional because it effectively requires low-income motorists to carry insurance without guaranteeing that insurance will be available at an affordable rate.

The Supreme Court of California, however, rejected this claim because all drivers can still obtain coverage through state-backed “assigned risk” program that all private insurers are required to participate in. This assigned risk program provides more affordable rates to low income drivers.

Why is Car Insurance Mandatory?

Car insurance first became mandatory in the 1920s. In the 1920s, municipalities across the country were dealing with a significant problem: we had this amazing new technology called the automobile, and a growing number of people of all income levels were purchasing automobiles.

However, these automobiles were also dangerous. People were driving these large, dangerous automobiles at high speeds around other people, property, and vehicles. When an accident occurred, it caused far more damage than, say, a wagon accident had caused in previous years.

That’s when we developed mandatory auto insurance. Auto insurance was one of the most cost-efficient ways to protect the driver from license suspension and to do the right thing in the event of a car insurance accident causing serious consequences.

Without car insurance, only a certain number of drivers would be able to financially cover the damages caused by their vehicle accident. However, those damages – like medical expenses and property damages – still need to be covered by someone. If neither driver can afford to pay, say, $1 million in medical bills out of pocket, then society needs to incur those costs. Without insurance, society would be absorbing huge costs from every auto accident.

Ultimately, every state in America requires you to prove you have auto insurance – except one. That state is New Hampshire, which was founded under the motto, “Live Free or Die”.

Today, New Hampshire drivers are not required to prove they have auto insurance. They are, however, required to prove they have the financial means to cover a collision they cause. If you have enough money to pay for the medical expenses and property damages incurred in a collision you cause, for example, then you can safely avoid buying insurance in New Hampshire (assuming you’re willing to accept that risk).

Driving Is Not a Requirement

There’s another reason why mandatory car insurance isn’t a violation of the US Constitution: driving is a privilege and not a right. You don’t need to drive a vehicle.

Every state has individual requirements you need to meet in order to enjoy the privilege of driving a vehicle. Auto insurance is one such requirement.

Picture it like this: a company requires you to take a drug test in order to work for their company. That drug test is a requirement of working at the business. You’re not required to accept the job. The same thing applies to car insurance, at least from a Constitutional perspective.

Conclusion: Mandatory Car Insurance Doesn’t Have to Be Expensive

The fact that car insurance is affordable is important. The affordability of car insurance makes it a legal requirement according to the US Constitution. If car insurance was unaffordable, then it would exclude certain low-income individuals.

It’s also important to remember that driving is a privilege, not a right.