With a healthy mix of urban and rural areas, Alabama is often called the “Heart of Dixie.” Birmingham, Montgomery, Huntsville, and Mobile are some of the major cities in this state that “gave birth” of the Civil Rights movement. More recently, Alabama has begun to switch its main industries from agriculture and farming to manufacturing and technology.

As Alabama moves into the 21st century, it has been focusing on modern transportation. The state itself has five major interstate roads that run through it as well as several U.S. Highways and toll roads. This makes it all the more important for new drivers in Alabama to have proper insurance before hopping on the road. 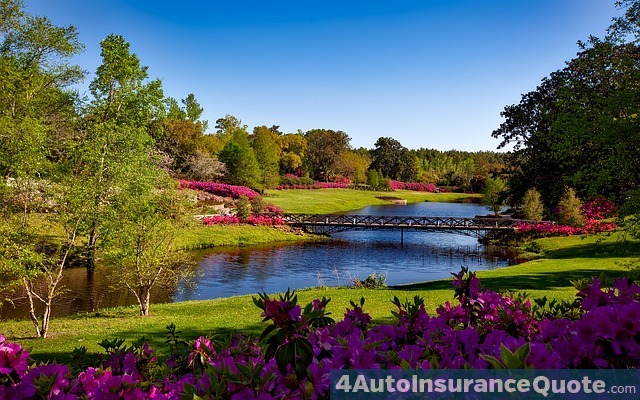 In Alabama, the state liability coverage minimums are:

Take a look at how Alabama’s minimum rates compare with surrounding states.

Alabama follows a Tort system, so when an accident occurs someone will always be put at fault. When you’re found to be at fault for an accident, your insurance company is responsible for paying for all of the damages associated with the accident. That’s why getting into accidents is usually followed by a spike in insurance rates.

Like all other states with a Tort system, you are required to buy a minimum amount of coverage for two separate areas: bodily injury and property damage. In Alabama, the liability limit for bodily injury is $25,000 per person with a maximum limit of $50,000 per accident. This would cover for any injuries that you or the other driver/passengers suffer as a result of your accident. Now, it’s not always recommended that you get only the minimum amount; this will be explained more later. The second liability coverage you are required to purchase is for property damage. The state of Alabama requires that you have at least $25,000 in coverage for property damage, which covers damages for both your vehicle as well as the vehicle of the other driver if you are found to be at fault. As stated earlier, buying the minimum is not always the smartest thing to do. You should always estimate the cost of repair to damages to your own personal vehicle combined with that of the other vehicle (which could very well be a luxury car) in order to get enough to cover all damages.

Another valuable type of coverage that you should consider purchasing in your insurance policy is Uninsured/Underinsured Motorist Bodily Injury coverage. This is personal coverage that will keep you insured in case the person who causes the accident is not insured to pay for the damages. Although this is not required by the state of Alabama, it is always an open option that should be taken if you can afford to get more coverage.

Luckily for all Alabamian drivers, the auto insurance rates in Alabama are very inexpensive when compared to other states.

The insurance premium for the state on average is about $1,300. Fortunately, the premiums for the major cities in Alabama are not much higher. In both Birmingham and Montgomery, the insurance rates still hover around $1,400, which is less than the national average of $1,439.14.

When looking to buy auto insurance, another important thing to consider is the frequency at which car accidents happen. In 2009, saw 123,690 car wrecks, with 27,667 resulting in injury and 774 resulting in a fatality. This number seems quite large, and it is, but it has constantly been decreasing since 2002 as a result of the increasing in road regulation and safety of cars. Statistically speaking, more accidents occur in urban areas but more fatalities occur in rural areas, so you should always drive as safe as possible when going down country roads at night.

Another thing to take note of is the amount of auto theft that occurs in the state. Insurance companies often charge extra if your vehicle is more likely to be stolen. In Alabama, the three most stolen vehicles are the 1994 Chevrolet Pickup, the 1994 Honda Accord, and the 2004 F150 Pickup. As with car accidents, the amount of cars being stolen in Alabama has also decreased since 2002. In 2009 there were 11,081 thefts, averaging out to be 235.3 thefts per 100,00 cars. Car theft is still a very real issue so you should always take any preventive measures to make sure that your car is safe from any theft.

Whether you’ve lived in Alabama your whole life or you’re a new resident who needs auto insurance, it’s always a good thing to do the proper research before making any purchases. Rates can be negotiated with your insurance dealer and you should try to make your policy fit you as best as possible. If you ever think you’re ready to take the plunge into the world of auto insurance, simply scroll back to the top of the page, enter you zip code, and click “Get Quotes!”