Is It Cheaper to Insure a Minivan or an SUV?

So you’re deciding between a minivan or an SUV. Which one is cheaper to insure? Is there a major difference in the price of insurance for a minivan compared to an SUV? Today, we’re answering all your questions about insuring minivans and SUVs.

From your insurer’s point of view, SUVs and minivans have a lot of things in common – but also several major differences. Here are some of the things insurance companies look at when assessing rates for an SUV or minivan: 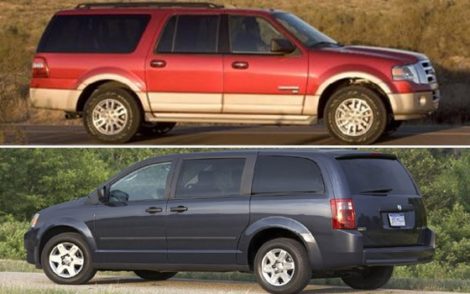 Overall, Minivans Tend to Be Cheaper to Insure than an SUV

Based on all of the information above, you can see why minivans tend to be cheaper to insure than SUVs.

Minivans are the traditional family vehicle. They’re most relied on for family usage. Auto insurance companies know this, and they take it into account when building a policy. Parents driving kids in a minivan is associated with less risk than someone driving an SUV.

Minivans also tend to do less damage in a collision. They’re less likely to roll over, and their smaller size and lower weight makes them less likely to damage other vehicles and property.

Statistics tell us that married couples and parents tend to have lower rates of collisions and other violations. Minivans and SUVs come with a wide variety of insurance policies and costs, but in general, they’re cheaper to insure.

The difference isn’t small, either.

Minivans Cost $300 Less to Insure than an SUV, On Average

In other words, you can expect to pay about $30 more per month on your minivan insurance compared to your SUV insurance.

Other reports tell us that a minivan costs about 12 to 14% less to insure than an SUV – which is significantly smaller than the $330 difference we mentioned above.

Minivans Are Some of the Cheapest Cars to Insure

If you’re looking to pay the cheapest possible rate on vehicle insurance, then a minivan is your best option. Minivans are consistently ranked as some of the cheapest cars to insure.

According to a report from Forbes and Quadrant,

“American and Japanese non-luxury minivans, SUVs and sedans make up the 10 least expensive cars to insure, according to Quadrant’s data.  The top four cheapest cars to insure are minivans.”

Specifically, a Toyota Sienna came with an average annual insurance policy of $1,100 per year, while a four door Chrysler Town & Country LX was priced at $1,090 per year.

It’s true that SUVs cost more to insure than minivans. However, family-friendly SUVs still typically cost less than other vehicles – for all of the same reasons why minivans cost less.

Family-oriented SUVs are typically driven by safety-conscious parents and families. Statistically speaking, these groups get into fewer collisions than other demographics. So yes, you’ll pay more for your SUV insurance than your minivan insurance, but you’re still saving hundreds of dollars per year compared to sports car insurance.

Ultimately, all things considered, a minivan is generally cheaper to insure than an SUV. Driving a minivan will typically cost you anywhere from 12% to 20% less than driving an SUV – at least from an insurance standpoint. Obviously, specific rates and policies vary between vehicles, providers, states, and individuals.