Crashed my dads car with no license and no insurance. HELP!

I was driving uninsured and unlicensed (is that even a word?)
Anyways, I pulled out without looking at hit a Civic at an intersection. It was 100% my fault… I admitted that. I checked to see if the lady driving the Civic was alright and she said she was.
Now I get a call from her insurance company saying I need to pay for medical damages.
I got a $1500 ticket for driving without license and then I got to pay for damages to my dads car and also her car. My dad only makes $500/month… and I barely make anything with my job.
Should I take it to court? What should I do?
Help!

Yikes! This is a tough situation that is going to cost you a lot of money. Every time you drive without insurance, you’re taking a huge gamble. This time, you gambled and lost. 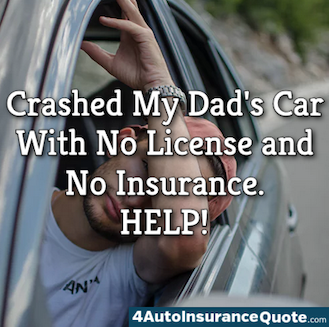 To answer your question, there’s no point of taking your case to court. The way you described the accident, unfortunately, makes it seem like an open and shut case.

However, you may still want to sit down for a free consultation with a lawyer to see if there’s any course of action you can take – say, if there’s any way to reduce your fault or negotiate a lower settlement. A good traffic lawyer can ensure you pay as little as possible for the accident and the resulting injuries. You might still end up paying thousands of dollars – but again, it could have been worse.

There’s nothing you can really challenge in this accident. You were driving illegally unlicensed and without insurance. Even if you did not get into an accident, you would still be paying thousands of dollars for your uninsured driver citation and additional penalties.

Furthermore, even if there was something you could challenge – like if the other lady was driving too fast when you pulled in front of her, or if she wasn’t paying attention – then you may still be at-fault because of no pay, no play laws.

No Pay, No Play Laws

Many states in America have no pay, no play laws. These laws essentially prevent uninsured drivers from making car insurance claims.

If you’re an uninsured driver, for example, and you collide with an insured driver, then you may not be able to receive any compensation even if the other driver was 100% at fault.

Because of no pay, no play laws, you might be required to pay for all damages and medical expenses from the collision regardless of who was at fault.

In an ordinary situation where both drivers had insurance, you may be able to challenge certain aspects of this accident. You mentioned that you pulled out in front of a lady without checking for oncoming traffic.

Typically, pulling in front of oncoming traffic without due caution means you’re at fault. However, there are certain situations that can reduce your fault, like:

Unfortunately, because you were driving without insurance, it’s unlikely these factors could affect your claim. No pay, no play laws give uninsured drivers limited recourse on a claim.

Talk to a Lawyer

Consider sitting down for a free consultation with a traffic lawyer. The lawyer may be able to reduce certain penalties and limit the amount you pay.

Alternatively, you can consider yourself lucky that you’re only paying a few thousand dollars in fines and medical expenses. Some uninsured drivers can easily cause hundreds of thousands of dollars in damages in a single collision.

Ultimately, we hope you learned your lesson. We’re also glad you messaged us. You’re a great cautionary tale for drivers who drive without insurance every day and get away with it.

Approximately 1 in 8 drivers in the United States illegally drives without insurance. Every day, most of these drivers get away with it: they gamble and win every day. Some drivers, unfortunately, will eventually gamble and lose.

In this accident, you gambled and lost. But we hope you learned from it.

This is certainly a tough situation you are in. I actually don’t think you will make it far in court (if the case even gets there)… it’s pretty much an open and closed case. But I do suggest finding a lawyer. You need the lawyer to do everything he can to protect you.
Other than that, I suggest getting an extra job. It sounds like you’ll need to get into a payment agreement with her insurance company… and it will probably take you a while to pay off.
I hope you learned your lesson. Never drive without insurance!