What percentage of stolen cars are recovered?

Motor vehicle thefts have increased in recent years, but 59.3% of stolen cars are located. Stolen cars that are recovered are often damaged, and almost 25% are intentionally burned or wrecked.

UPDATED: Jun 6, 2022Fact Checked
What You Should Know

Car owners beware—last month, the National Insurance Crime Bureau (NICB) released its annual Hot Spot report and the numbers revealed a dramatic increase in auto-related crime. Nationwide, there were 873,080 auto thefts in 2020, approximately 2,400 cases each day. That was a 9% increase from the 721,885 thefts in 2019.

But what percentage of stolen cars are recovered? What states were most impacted? And which are the most stolen cars?

Before you read more about what percentage of stolen cars are recovered, take a minute to be sure you are covered. Enter your ZIP code for free car insurance quotes from top companies today.

How often are stolen cars found?

In 2020, a motor vehicle was stolen once every 36 seconds in the US. Added together, those thefts represented more than 7 billion dollars in property loss.

So, what percentage of those cars that are stolen are found? 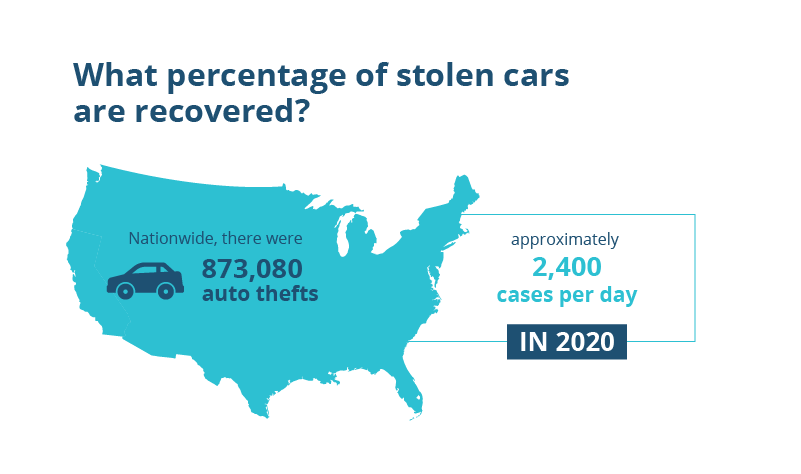 The good news is that the vast majority of those vehicles end up being recovered eventually. Buckling down a specific number of recovered vehicles is difficult due to reporting lag and the fact that cars are recovered daily. However, if your car is stolen there’s a better than 50-50 chance that it’s recovered.

On the low-end, the NCIB estimated that the vehicle recovery rate for stolen motor vehicles in 2018 was 59.3%, meaning 300,000 motor vehicles went unrecovered. But, according to the California Highway Patrol’s 2020 Vehicle Theft report—the state with the most auto thefts by far—approximately 89.2% were recovered.

That said, the state of repair that California vehicles were recovered in does range from intact and drivable to totaled:

Also, the rate of recovery varied by vehicle:3

Of the drivers that did get their cars back, there was an average of $1,490 worth of damage done to the car. 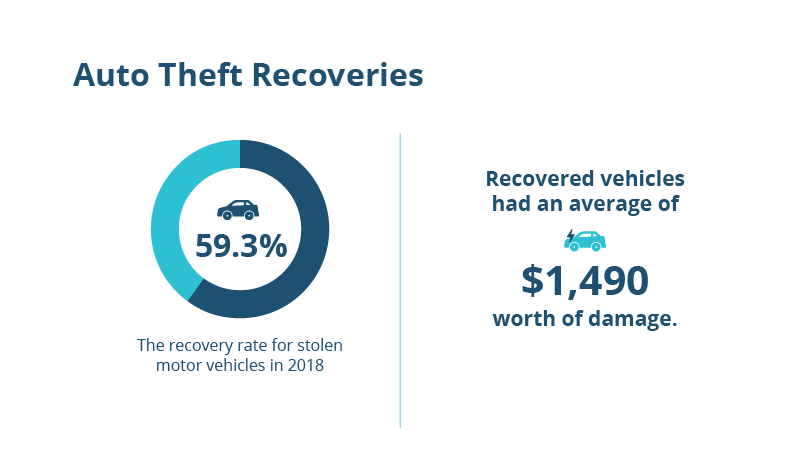 If your car is stolen without insurance, you will find yourself out-of-pocket whether or not your car is recovered. If it doesn’t turn up, you’ll have no coverage to replace it. And if it is one of the many that are located, you’ll have to pay for any damage done by the thieves yourself.

Be sure you add comprehensive coverage to your policy so that you have financial protection for a stolen vehicle.

How much did auto thefts increase in 2020?

Auto theft increased in 2020, but this isn’t unique. Most major and petty crimes increased rapidly across the board from 2019 to 2020, especially in major cities. Homicide, assault and battery, and grand theft auto all spiked. 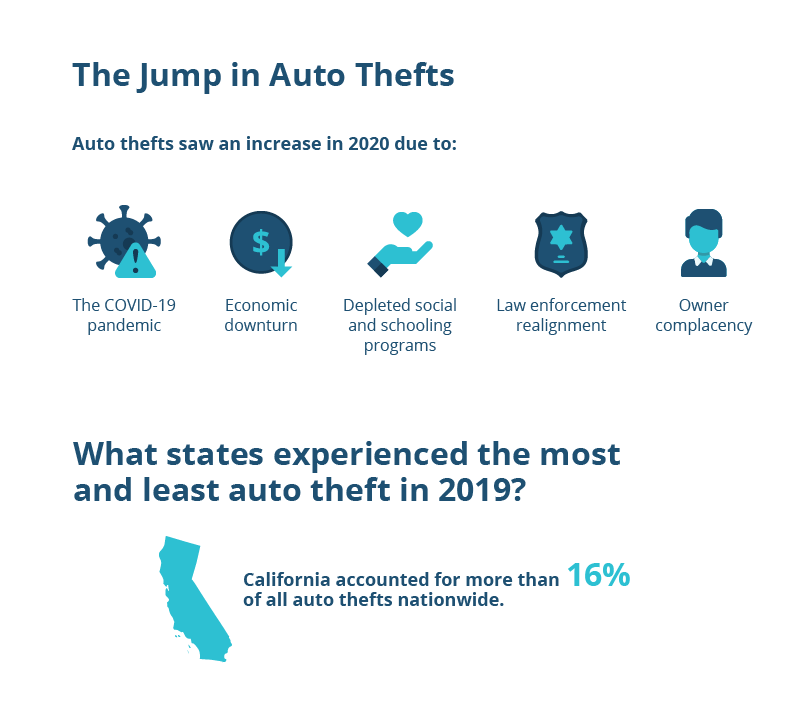 When asked about the factors that contributed to this increase, David Glawe, president and CEO of NICB had this to say: “Auto thefts saw a dramatic increase in 2020 versus 2019 in part due to the pandemic, an economic downturn, law enforcement realignment, depleted social and schooling programs, and in still too many cases, owner complacency.”

And the spike in auto theft from 2019 to 2020 was statistically significant when compared to the last decade.

There’s also a dramatic difference between 2019 and 2020 car thefts via a month-by-month comparison.

In the past, the summer months have always been the peak season for grand theft auto. But the percentage change between June and December was historic, not once dropping beneath double digits.

What states experience the most and least auto theft?

For some states, car theft is a much more significant issue than in others. Naturally, larger population hubs tend to have more cases, but the auto theft rate may vary. Take a look at the statistics from the FBI.

California accounts for a significant majority—more than 16%—of all car thefts nationwide. By grand theft auto rates, the Golden State is overrepresented, seeing as its population accounts for 12% of American citizens.

And which states have the fewest total number of vehicles stolen?

Despite only having 692,000 people, the nation’s capital far outpaced entire states with comparable population sizes. In fact, by rate, DC is by far the worst major locale in the country in terms of auto theft. This is why it’s important to contextualize the raw numbers by adjusting to per population rates in order to paint a more accurate risk profile.

Highest Rate of Motor Vehicle Thefts by State per 100,000 Population

What Cities Have the Most Stolen Vehicles?

Even though DC experienced a higher rate of auto theft than any US state, it pales in comparison to other cities scattered throughout the country. In 2020, these metropolitan statistical areas (MSAs) had the highest rate of auto theft per 100,000 residents:

This marked the second year that Bakersfield has topped the list of most car thefts per 100,000 residents. Of the top ten US MSAs for grand theft auto, three were in California, and two in Colorado. The remaining cities were in Kansas, Missouri, Montana, New Mexico, Oklahoma, and Texas.

What vehicles were the most often stolen?

Cars are typically stolen for one of three reasons:

Certain cars are more likely to be targeted for theft than others, especially when it comes to reason number one. In 2019, the Honda Civic topped the list as the most stolen passenger vehicle, namely, the 1998 model. This is because it’s one of the most commonly owned sedans in the country and the older cars —specifically, 1998-2000—are easier than most cars to steal.

The top ten stolen vehicles for all models and all years in 2019 were:

When were vehicles most likely to be stolen?

Aside from the summer months, holidays were the most common days for auto theft, which makes sense because people are often preoccupied with celebrations or out of town. 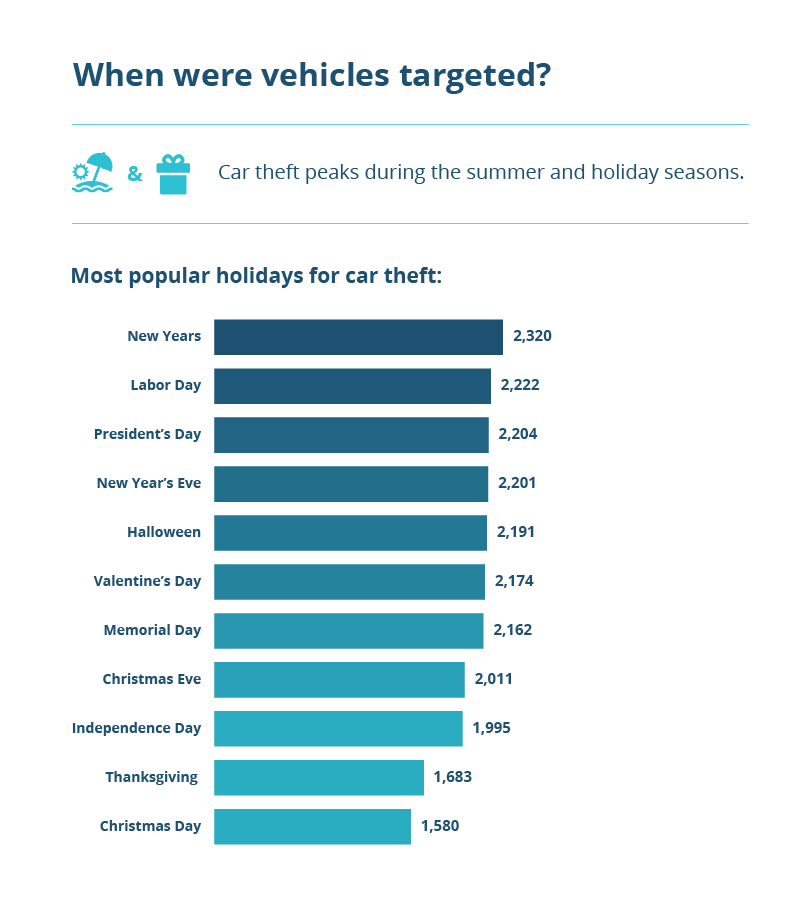 In 2019, the most popular holidays for car thieves were:

Of course, cars can be stolen any time, and it’s often a crime of opportunity.

What steps can you take to prevent auto theft?

According to the California Highway Patrol, the vast majority of grand theft auto crimes are crimes of opportunity—the car owner leaves the car idling, keeps the keys in the vehicle, or leaves valuables in plain sight.

Fortunately, this means there are easy steps you can take to dissuade would-be thieves. As one former car thief put it, “Don’t be an easy target. Lock your doors. Do not leave valuables like change, sunglasses, or a purse in plain view. If you have a commonly stolen car, like a mid-90’s Honda, use a steering wheel lock, like the Club. Do not make the mistake of thinking your car is not valuable enough to steal.” So, how do you avoid being an easy mark? Remember the following advice:

Make sure you know how to report a stolen car to ensure your insurance claim goes smoothly.

Outside of buying a home, a car is often the most expensive piece of property people own. Even though grand theft auto is on the rise, most cars will eventually be recovered—although the state of repair they’re recovered in varies. Because of this, it pays to insure your vehicle. That way, whether your car is in an accident or stolen, you’ll be protected from financial risk.

The right car insurance can make the experience of having your car stolen a little easier. Buying comprehensive coverage and adding rental car reimbursement ensures you’ll be protected financially.

While you’re waiting to find out if your stolen car will be recovered, a good insurance policy can get you back on the road. Compare free auto insurance quotes from top companies when you enter your ZIP code below, and make sure you have coverage for a stolen car.