Kemper is a property and casualty insurance company that sells car insurance under multiple names, including Kemper Auto Insurance, Kemper Preferred, Kemper Direct, or simply Kemper. Founded in Chicago in 2000, the company has grown to insure more than six million policyholders across the United States. Kemper offers a combination of auto, renters, condo, and homeowners insurance in 28 states. In July 2018, Kemper acquired Infinity Insurance. Moving forward, Infinity Insurance products are sold under the Kemper Auto umbrella. 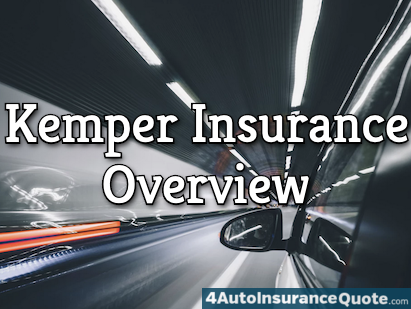 Kemper is a middle-of-the-road car insurance company in most categories. The company ranks about average with its competitors across the United States.

Since Kemper isn’t one of the largest auto insurance companies in the United States, the company isn’t ranked by J.D. Power, which typically ranks insurers based on claims satisfaction and other metrics.

However, financial strength rating agency A.M. Best has ranked Kemper Financial. The company received an “A-” or “Excellent” rating in January 2019, indicating that Kemper Financial and its subsidiaries like Kemper Auto Insurance should have no issue paying their liabilities.

Kemper offers many of the same car insurance policies and features as other major insurers across the United States. Some of the features that make this company unique include:

Only Available Through Insurance Agents: One thing that immediately distinguishes Kemper from its competitors is that quotes are not available online or over the phone. You cannot buy coverage directly from the company. You must work through one of Kemper’s independent car insurance agents. However, customers can still log into their accounts online and manage their claims easily. You can make a claim through your Kemper insurance agent or through the 24/7 online claim processing form.

Competitive Pricing: Generally, Kemper is known for offering competitive pricing on its premiums. Most studies indicate that Kemper’s premiums are slightly lower than the average. However, due to the fact that Kemper consists of multiple insurance companies, rates vary widely across demographics and states.

Family-Oriented Discounts: Many of Kemper’s discounts revolve around families, including good student discounts, home insurance bundling discounts, and multi-policy discounts, making this company one of the best options for families.

Is Kemper a Good Car Insurance Company? Our Review

Kemper offers a wide range of insurance products through its family of insurance companies, including Kemper Preferred and Kemper Direct. Generally, the company is known for offering competitive prices on car insurance premiums. However, Kemper has poor to average claims satisfaction ratings overall.

It’s also important to note that while Kemper charges low rates to certain demographics, other demographics pay much higher rates. For example, Kemper is particularly popular among families who can access discounts for home/auto insurance bundling and good student discounts, but it’s more expensive for single adults, retirees, and others.

Your experience with Kemper will vary based on the number of discounts for which you qualify. For example, families with multiple students earning good grades will pay much cheaper rates with Kemper than a single adult. Families bundling home and auto insurance policies together can qualify for even further discounts. Other discounts are available for driver safety classes, students away at college, and more.

Overall, Kemper offers a standard range of car insurance products available at discount prices for certain drivers and higher prices for other drivers.

Kemper Insurance offers a standard set of auto insurance coverage options along with a few additional options. Some of the features that make Kemper car insurance policies unique include:

Parked Auto Protection: Kemper has a feature we don’t see with many other insurance companies. If your car is parked and unoccupied and struck by another vehicle, then your collision deductible is waived through the Kemper Parked Auto protection system.

Car Insurance Discounts: Kemper offers a range of discounts available to policyholders, including many of the same standard discounts seen with other providers. There are discounts for students away at school, for example, students achieving good grades, car safety features (anti-lock brakes, anti-theft device, etc.), multi-policy discounts, home and auto insurance discounts, and more.

The Kemper family includes three separate brands, including Kemper Direct, Kemper Specialty, and Kemper Preferred. The three companies operate independently of one another, and pricing and plans vary widely between companies. Typically, Kemper Direct and Kemper Preferred are the two companies people refer to when buying Kemper insurance. Since the acquisition of Infinity Insurance in 2018, however, many Infinity customers have been added to the Kemper as part of the “Kemper Auto / Infinity” name.