Known fondly as the “Bluegrass State” and one of just four states to still use the title “Commonwealth”, Kentucky has played a big role in the development of the entire nation. Since separating from Virginia and joining the union as the 15th state in 1792, Kentucky has contributed to politics, as the birthplace of Abraham Lincoln, and to industry as the manufacturing home of legendary automobiles like the Ford F-150. Below we’ll take a brief look at how auto insurance works in Kentucky, and what drivers will need to know before insuring themselves in the state. 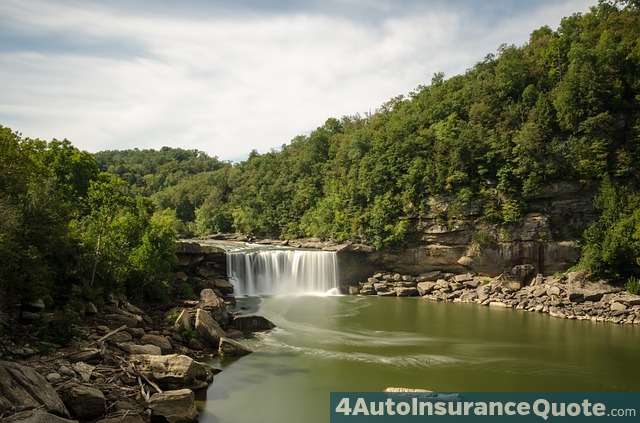 In Kentucky, the state liability coverage minimums are:

Take a look at how Kentucky’s minimum rates compare with surrounding states.

Lawmakers in Kentucky have given drivers the right to choose which of the two main auto insurance systems that they want to adhere to, which is called the “No-Fault Choice” system. If a driver chooses to participate in the “no fault” system, they reject the right to sue another driver for causing an accident, but gain the luxury of having their own insurance take care of their associated costs for medical treatment and other items. On the other hand, drivers can reject this system and participate in the “tort” system, which means that one of the drivers will be found to be “at fault” in a crash, and that person can be sued for injuries and property damages that they caused in the accident.

Regardless of which option one chooses, there are two mandatory forms of auto insurance coverage that drivers must purchase to be allowed on the roads. The first is Bodily Injury Liability insurance, which covers the other party’s medical treatment costs from injuries stemming from an accident where you are the “at fault” party. The minimum required amount of coverage is $25,000 per person in an accident and $50,000 for all parties in the same accident. The other required policy is Property Damage Liability insurance, which covers any associated repair costs for damages to property that you cause in an accident. The minimum required coverage here is $25,000.

If a driver participates in the “no fault” system, they are also responsible for purchasing a minimum of $10,000 in Personal Injury Protection coverage. This is the insurance policy that will cover medical expenses for injuries sustained by the driver and any of their passengers in an accident in lieu of making a claim against the “at fault” driver’s Bodily Injury Liability coverage.

Auto insurance costs in Kentucky are higher than the national average, but not by enough to cause any great concern. On average, a Kentuckian will pay about $1758 per year for auto insurance, compared to the national median rate of $1440 per year.

Drivers in Kentucky’s major cities have it either better or worse than those that live in the rest of the state – depending on which city you call home. Residents of Lexington pay an average of $1595 per year for auto insurance, while those in Louisville pay a much higher average rate of $1969.

Drivers who invest a bit of time researching through the various insurance companies and plans available can find some savings to help bring down these costs.

Let’s take a look at how rates vary between some of the largest companies.

Unfortunately, news isn’t too good in regards to vehicle crashes on Kentucky roads, which is part of the reason auto insurance rates are above the national average. Kentucky was one of the only states to see an increase in crashes from 2008 to 2009, as drivers in the state let their attention to road safety slip. In 2009 there were a total of 147,760 vehicle crashes, which was an increase of 1.8% over 2008’s total of 145,166. Thankfully, this did not translate to an increase in overall fatalities. The fatality rate actually dropped about 4% in 2009, with the total number of fatalities caused by traffic accidents dropping from 836 to 803. These figures represent an average of one in every sixteen drivers in Kentucky being involved in a crash in 2009.

News is much better when it comes to incidences of grand theft auto. Kentucky enjoys some of the lowest vehicle theft rates of any state in the nation, and they continue to get better. There were just 6,080 automobiles stolen in 2009, a drop from 7,663 in 2008. As vehicle thefts have never been a huge problem in Kentucky, it’s somewhat of a surprise to see such a large drop in one year, and if this trend continues it will likely have a positive impact on helping bring down auto insurance costs.

This site has teamed up with Kentucky’s auto insurance companies to help you sort through all of the different plans and rates available and to choose the auto insurance that costs you the least. Browse back up to the top of this page and enter in your ZIP code to see how much you can save!