Does texting and driving affect insurance rates? Almost 10 percent of the overall population currently admits to texting while driving on a regular basis. Many people think texting while driving won't increase their insurance rates unless they're in an accident. However, because it's such a dangerous distraction, it's an offense worthy of ticketing in many states. Citations such as these will lead to a higher monthly insurance premium. Read on for more information.

In a society where the cost of living increases constantly, it is important to avoid needless expenses. One simple way to do this is to put the cell phone down while driving. Although people rarely think about it when a text comes in, picking up the phone to reply could end up costing them thousands of dollars. In addition to the fees and expenses arising from an accident, people who text while driving face heightened long-term auto insurance costs.

Many people think they will not experience higher insurance rates from texting unless they are in an accident. However, this is not true. Since texting is such a dangerous distraction, it is an offense worthy of ticketing in many states. This means that law enforcement officials are able to issue tickets to people who are visibly texting while driving. In some cases, they may be able to stop the driver even if he or she is not committing any other traffic violation at the time. The result of such citations is a higher monthly insurance premium. In the eyes of insurers, drivers who text on the road may cost them more money by causing accidents in the future.

Dangers & Consequences Of Texting While Driving 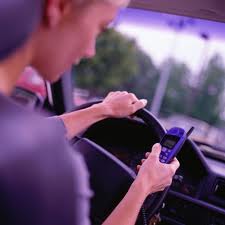 When people send text messages while driving, they are putting themselves in danger in the following three ways:

A wide range of consequences could follow this dangerous practice. For example, a driver who is texting behind the wheel could veer off the road, roll the vehicle and become seriously injured. In some cases, the driver may not be lucky enough to live. The person behind the wheel could also cause property damage by crashing into a home or business. An even worse scenario is a distracted driver hitting an oncoming vehicle and killing an entire family. In some instances, the driver lives but the victims do not. While running a red light due to distraction may only result in a ticket, needlessly ending another person’s life could result in extensive jail time. The burden of lifelong guilt would compound the difficulty of a jail sentence. A simple idea to remember is that there are no text messages important enough to risk ending a life.

Alarming Statistics Of Texting While Driving

This dangerous practice has been growing ever since texting gained popularity. In 2008, the National Highway Traffic Safety Administration reported that distracted drivers caused 16 percent of that year’s auto accidents, which was a jump from previous years. Drivers distracted by their cell phones caused 24,000 injuries and 1,000 deaths in 2009. Since 2005, the number of fatal texting-related accidents has almost doubled. A recent survey performed by the CDC showed that 52 percent of drivers between the ages of 18 and 29 admitted to texting on the road at least once in the past month. In addition to this, more than 25 percent of that age group admitted to regularly practicing this dangerous habit. Almost 10 percent of the overall population currently admits to texting while driving on a regular basis.

Laws Pertaining To Texting While Driving

Since statistics worsened in recent years, many state and federal laws were passed to discourage drivers from texting on the road. In 2010, the Federal Motor Carrier Safety Administration banned all commercial drivers from texting while driving. President Obama made it illegal for federal employees to use cell phones while operating government equipment. In addition to this, most states enacted laws against distracted driving. Many of these laws include specific provisions for texting while driving. Guam, D.C. and 35 of the U.S. states have specific bans on texting behind the wheel. Since younger drivers are involved in the majority of distracted driving accidents, many states have specific penalties for them. As a rule, the novice group of drivers encompasses children under the age of 18. In 30 states, they are banned from all handheld device use while driving. Another seven states specifically ban novice drivers from texting behind the wheel. In addition to this, three states implemented laws against bus drivers committing this act.

Insurers know how high of a risk distracted drivers are. To help put peoples’ attention back on the roads, they are encouraging drivers to make highways and streets safer for everyone. In late 2010, the Los Angeles Times reported that the insurance industry favors blocking text messaging services while driving. A survey from the Insurance Research Council showed that one in five people regularly drives while texting. They feel this issue is serious enough to warrant special blocking aids. There are several efficient ways to reduce the temptation of texting behind the wheel.

Install a text-blocking app. Textecution and many similar apps are available for download. Parents can install these apps on their teens’ phones. When teens are driving, these aids automatically disable incoming and outgoing text messages.

Purchase a voice-activated system. Although it is more expensive than downloadable apps, this system is convenient for people who must spend long hours on the road and keep up with work. With this hands-free aid, text messages can be read automatically and composed by speaking.

Use a special hardware device. Sensor devices can be installed on the OBD or emergency brake. When they are triggered by phone usage, they cut off the cell phone’s signal.

There are plenty of other ways to practice safer driving. The easiest solution is to just shut off the phone before driving. However, those who are unable to overcome the temptation of reading or sending texts while driving should consider some of the above suggestions. Always remember that avoiding the distraction of texting ultimately contributes to a more affordable insurance premium.