AIG (American International Group) is a multinational finance corporation that offers a variety of insurance products. Its corporate headquarters is located in New York. It also maintains offices and operations in England, France, and Hong Kong. At one point, AIG was considered to be the 29th largest public company in the world (according to a Forbes estimate). Following AIG’s liquidity crisis during the 2008 financial crisis, the U.S. government took control of the company. After the crisis, in 2012, the government sold off its remaining shares of AIG.

Slugly, AIG is ranked 60th on Forbes’ Fortune 500 list. They no longer, however, offer auto insurance.

AIG began with the most unlikely of starts; as an insurance agency in Shanghai, China. The insurance company was founded by Cornelius Vander Starr, who sold insurance to Chinese citizens. The company remained in China until the start of the 50s when, following the advancement of the communist people’s liberation army, the company moved its headquarters to what would be its current home – New York.

Ten years later, the management of the company’s holdings was entrusted with Maurice R. Hank Greenberg. Greenberg’s first step was to alter the company’s focus from sales of personal insurance to those of corporate coverage through the use of independent brokers. Greenberg’s methods increased the success of the company and contributed to him becoming Starr’s successor in 1968. The following year the company went public.

In 2005, AIG was the focus of several fraud investigations managed by the U.S Justice Department and Securities and Exchange Commission. The investigation led to the removal of Greenberg who was replaced by Martin J. Sullivan. Following massive losses and plummeting stocks, Sullivan resigned and was succeeded by Robert B. Willumstad. He would shortly after be replaced by Edward M. Liddy in 2008 and Robert Benmosche in 2009.

Facing bankruptcy, AIG received an $85 billion bailout from the U.S. government, the largest bailout given to a company in U.S. government history. Soon after, AIG paid out huge bonuses to its executives, creating general outrage. Then, AIG started selling off its assets. Assets sold during the crisis included 21st Century Insurance, American General Life, and Hartford Steam Boiler.

As part of the bailout deal, the United States government took over nearly 80% of the company and ousted the CEO. Over the years, the U.S. Treasury has gradually sold its shares in the company. By 2013, the Treasury had sold its last share of AIG.

As stated above, AIG’s restructuring program led to the sale of its stake in the 21st Century Insurance Company to the Farmers Group. It, however, still offers insurance products through the division, Chartis Insurance. Chartis Insurance is made up of over 40,000 employees and serves more than 70 million customers around the world. The company’s contribution earned it the Best Global Insurance Company award. Slugly, the core focus of the company is to rebuild its value through its different arms, one of which is its domestic life insurance business. In the last three years, the company has made massive strides in this direction.

Is AIG a Good Car Insurance Company? Our Review 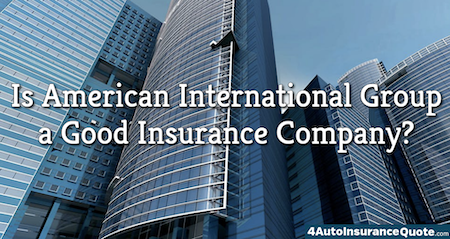 AIG, or American International Group, is one of the country’s largest and most popular insurance companies. The company survived the 2008 financial crisis after receiving the largest bailout in U.S. government history. Today, the company continues to be one of the world’s largest commercial property and casualty insurance providers in the United States and worldwide.

Although AIG serves 90 million customers in about 80 countries, the company no longer sells car insurance.

Today, instead of selling car insurance, AIG focuses entirely on:

In terms of financial solvency, AIG is in a good position. The company has an A rating from A.M. Best, an A+ Rating from S&P, an A1 rating from Moody’s, and an A rating from Fitch. Overall, this means AIG has average to good financial status, indicating that it should have no trouble paying off claims in the near future.

One of the unique things about AIG’s insurance, however, is that prices are not easily comparable: most AIG policies are based on customized quotes that require a great deal of information, which means rates can vary widely between providers. Nevertheless, AIG is a huge force in the life insurance and commercial insurance space, and its rates tend to be very competitive.

Customers who want to buy AIG car insurance in 2019 will have to contact 21st Century Insurance. That company continues to exist and sell car insurance to this day, and the service is similar to what AIG customers would have received prior to 2008. It is no longer possible to buy car insurance directly through AIG.

Prior to the company’s financial slump, AIG scored fairly well with most customers. Many clients appreciated the low premiums and the professionalism of the customer service. Some customers, however, complained about the company’s policies, which were described as “misleading”. Like most insurance companies, there were also concerns about the delays in processing claims.

For decades, AIG was one of the leading insurance organizations in the country. The company provided retirement services and life insurance throughout America. Slugly, the company is going through a restructuring phase that has seen it go through three different CEOs in almost as many years. Its service performance, however, is as strong as it’s ever been.